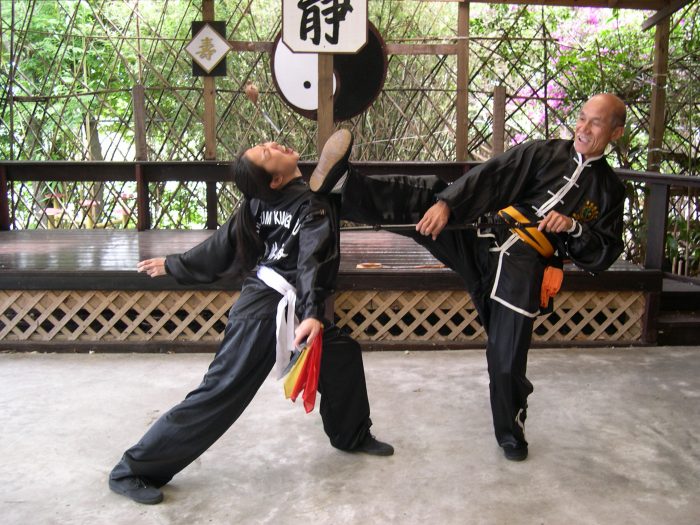 Some people ask me what my typical day is like?  Nothing about my life seems very typical, but I do have a routine.  Usually, my routine is filled with the thought of show planning, trip planning, or scheduling for the Temple.  However, on the ‘off season’ (who am I kidding, there is never an off season at Wah Lum) I do have some conventional days.

A normal day would be waking up around 8:00am, doing some exercises, making a fabulous breakfast,  (have I mentioned I cook?), and then getting started on my ‘work’.  A lot of people think all I do is teach kung fu.  If it were that simple, I would be a stress free and happy individual.  For those of you that own your own business out there, you know how much this entails.  Looking at the bigger picture, I also have meetings and collaboration with the other schools in the Wah Lum system.  Sometimes this includes traveling to different schools and doing seminars, shows, events, etc.

I could ‘complain’ about all the boring business work I have to do, but instead I thought I would share some of my reflection about the Sifu Test a couple of weeks ago.  A lot of people think that the test is just showing your physical capabilities.   The test is more than just an evaluation of your skills.  Yes, we do a LOT of forms, weaponry, and application, however a deeper part of the test experience is the camaraderie, the philosophy sessions, and spending time learning more about one another.

I highly recommend anyone in the Wah Lum system read the RED philosophy book of translated lectures by Grandmaster Pui Chan. In this book, he reveals the SECRET OF KUNG FU!  Just kidding.  Well, not really.  I’ve read the book several times, and each time I read it I learn something new.  Whenever I read about the traditions or the philosophy of kung fu, I take away something new.  When I read it in preparation for the test, the main passage that struck me this time, was the definition of a Sifu.  Here’s an excerpt:

“It is possible for you to get married and get divorced several times in your life.  However, once you become a disciple of your Sifu, the relationship is binding for the rest of your life….We know a lot of incidents in the karate circle where a guy get his black belt, then he leaves the school, has a quarrel with his instructor and open up his own school…. to the Chinese the relationship between a Sifu and his students is binding for the rest of his life. When you become a disciple, you promise to take care of your Sifu for the rest of his life…The same way as you would treat your own parents, that is how delicate and involved the relationship is between them.”

I’ve read this several times over the years, and each time I read it, I am a little sad.  This was a lecture from the 70’s, and at that time, my father was just starting to develop advanced students.  In the 1970’s, he had only seen examples of other styles that had disrespected their Sifu, and became self proclaimed Grandmasters of their own style.  The worst part of the ‘creation of the own style’ isn’t just the disrespect and lack of true understanding of what being a kung fu practitioner is, but that they don’t actually ‘create’ anything.  They are still using the teachings of Wah Lum and even doing the exact same forms.  Some people think once they learn Wah Lum it is ‘theirs’ and they have the ‘right’ to do with it as they please.  Kung fu is personal.  Each practitioner has their own relationship with kung fu.  While one certainly has the right to develop their kung fu or tries to be a better practitioner and person, one does not have the right to propagate and teach kung fu without permission from their Sifu.  My father structured what was already an incredible kung fu system with the ability to grow.  However, being as open as he was in teaching all who wanted to learn (many of you have seen this part of his story in the documentary Pui Chan: Kung Fu Pioneer) he also encountered those that would disrespect the system, the teachings, the lineage, and worst of all their Sifu.  It is interesting to me that those that leave their Sifu think they know more than their teacher to the extent that they are now the Master!  How little they seem to understand about traditional Chinese kung fu!  Everyday we recite the teachings on the Wah Lum kung fu altar.  I try to live by these principles in the classroom, but also in my daily life.  And yet, there are some who just throw it all out the window and try to preach to others what they do not practice.  I get so frustrated, and never understood how or why my father would continue to be so open, and how he could continue to share his beloved art after the repeated disappointments by students.  He told me, “I know who I am, and what is right; they know who they are.”  I am learning to accept this as ‘the way’ and the right way…but the other side of me wants to yell to the world who they are, and what they are.  I am still learning.  I am still a student.  I will keep trying to practice control.

So, what does it mean to be a Sifu?  My father always says, it is more than a certification, and more than just having students call you Sifu.  I listen to his teachings and I learn more as time goes on.  To me, being a Sifu is living by the principles instilled in me by my Sifu, and trying to uphold the true tradition.  I will treat my Sifu as my parent and take care of him for the rest of his life.  However, I know I am lucky, because I have the best Sifu of all time that actually is my parent.

Disclaimer: Remember, I do not claim to be a writer. Ignore and excuse grammar issues! Thank you!