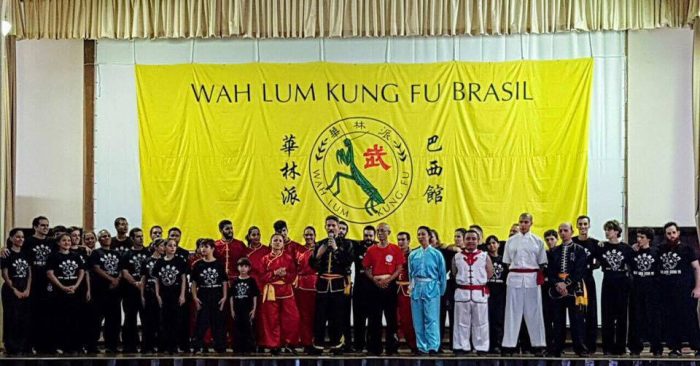 I wanted to take a moment during my day at sea to recap the weekend that I had in Rio de Janeiro. Being in Rio was an eye opening experience. The entire trip, although only a few days, seemed like a week. Probably because we were awake over 27 hours the first day we were there, and it was nonstop as soon as we landed. Upon our arrival into Rio, we quickly met up with the rest of the Wah Lum group and went to lunch. In classic Grandmaster Chan style, he already started to gather fans at the Chinese restaurant we ate at for lunch. Before we knew it, there was a congregation of people waiting to take photos with him. He is a people magnet. After lunch, we went to the school and taught a kung fu fan seminar.   The students worked very hard, and we enjoyed teaching them since they were so full of energy and excitement. I am so happy that we now have a full time school in Rio.

I have heard rumors of the poverty, bad economy, and crime in Rio de Janeiro, but do not usually judge anything until I experience it myself. I have seen many movies that portray the favelas and criminal activity, but I used to think they were exaggerated. Although many of the locals informed us of the tough economy, everyone still seemed so happy. Perhaps it was the fact we were there to celebrate an exciting occasion, but it seemed more like it is a part of who they are. I often write about gratitude and positive attitudes in my blog, but I always find it admirable when people in far more challenging situations are happier than we are in the US. The students there are

grateful for having kung fu in their life, they have positive attitudes, and they try to stay optimistic. As I walked around the streets of Rio de Janeiro, I said to O that many of ‘our kids’ back home would feel uncomfortable. It’s a big crowded city, and our suburban kids would likely feel intimidated there. Since we have traveled the world, we weren’t uncomfortable, but we were cautious. Although the weekend was positive, we did witness crime while we were there. Cell phones are often snatched out of your hand in the streets if you aren’t careful; but this is a small crime compared to what occurs on a daily basis. We were extremely cautious; we stayed in groups and always had a local with us. The students were such gracious hosts, and helped keep an eye on us foreigners. We practically had bodyguards with us wherever we went. I’m always extra wary if I don’t speak the language in a foreign country. One of the positive results of submerging myself in other cultures is the feeling of appreciation for the luxuries I have back home. The first time I went to China on my own and stayed in a local village, I came home really appreciating my toilet! Ah, the ‘little’ things.

The camaraderie over the weekend was overwhelming. I watched the students interact and help each other with every detail of the event. From helping each other prep uniforms, warming up, loading equipment to transporting us everywhere and buying us treats. Seeing them in motion was like watching a familiar dance.

(Random share: Speaking of dance…after an incredible Tipica Dinner (typical local meal) I was snatched up by a senior local and danced Samba with him. This was to the ‘old style’ samba 3-piece band. We saw many different bands that night as we walked around, but naturally I gravitated to the traditional one. Our attraction to that area was because of these seniors who obviously were maintaining and reviving the ‘old’ ways.  Check out our Forró dance here: samba (note it’s not the samba it is the Forró!)

For a moment it felt like we were back home at one of our shows. The Wah Lum way is strong, and no matter where you are, the spirit of Wah Lum always comes through. It didn’t matter that just outside the theater there were thousands of people getting ready for Carnival. We were preparing for a show, and it was a great show! I’ve already talked about how overwhelmed with pride I was with the show in my previous post, but it really made me realize that kung fu and our Wah Lum family really stretches across borders. It doesn’t matter where in the world you are, Wah Lum is Wah Lum, and we are keeping the tradition alive.

PODCAST: O and I discuss our time in Rio and more in my new podcast on Culture Chat. Check it out and let me know what you think.

3 thoughts on “The Rio Experience”